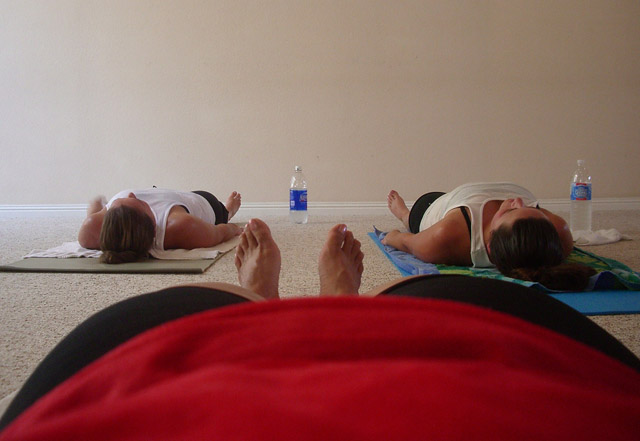 Summer is looming, though those chilly, rainy days are always a threat. Rather than forging the usual English moan, why not warm up in a 40°C bikram yoga class?

What: Also known as ‘fire yoga’ or ‘hot yoga’, this unique form of yoga is set in a room at 40°C. The exercise consists of 26 postures each repeated twice to enhance flexibility, strength and (somehow) relaxation. Founded by Bikram Choudhury in Calcutta, India with an aim to continue the healing methods of yoga guru and scientist Bishnu Ghosh, bikram yoga is now one of the fastest growing forms of yoga with over 600 studios worldwide.

Where: The original and still popular studios include Bikram Yoga in the City, Queens Park and Camden. Additional studios can be found in Soho (Bikram Yoga Soho), Balham and Fulham (Hot Bikram Yoga), Canary Wharf and Primrose Hill (Bikram Yoga Primrose Hill), and newer studios promoting ‘hot yoga’ at Yoga Haven in Clapham and Angel (and Brighton and Birmingham).

When: The 90 minute classes are on offer from the wee hours of the morning all the way through to late evenings weekdays and weekends (class tables are posted on the web-sites). Evening classes in particular fill up, so get there early.

The Rundown: You might say yoga is not your thing; but you probably haven’t tried it in a sauna-like setting. Sounds downright scary, but on the contrary, the sweltering temperature allows for increased stretching, body and mind focus, and toxin release. This form of yoga gives a cardiovascular workout, with each posture repeated to give wooden bodies another chance to limber up.

We tried it, and can verify all that ‘restored energy’ woo is no joke. The initial heat is challenging, but the warm-up and focus on breath allows the body to adjust and, before you know it, you are down on the floor attempting to glue your torso against your legs. We left completely drenched, feeling muscles we had never felt before and, strangely enough, rejuvenated – ready to take on the day.

So fear not – the exercise is not only a safe haven from miserable weather, but also an exhalation of the last night’s mayhem. Breathe in, breathe out and prepare to rid your body of all guilt!

Is This Right For You: The ‘I can’t touch my toes’ excuse won’t do, as classes are open to all levels, from the painfully inflexible to the insanely pliable. And that goes for both men and women – attendance is divided almost evenly along gender lines. The focus is on body, mind and spirit, however, some of the classes can be so over-crowded, it can be a tad difficult to focus.  And if you get bored easily – the same 26 postures after several sessions may seem a bit repetitive – but then – that might work in your favour.  Try it out – it is definitely worth the experience.